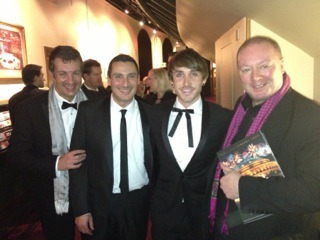 The Magic boys were in town tonight for the 100th Royal Variety Performance in the presence of Her Majesty The Queen and Prince Philip at The Royal Albert Hall.

I am a big supporter of The Entertainment Artists Benevolent Fund having performed fro the residents at Brinsworth House for their Christmas parties.

Every year it get tickets for Paul Phear from Magic FM, Steve Allen from London’s LBC and my family to see the show.

I was delighted to see again Kye Sones, who was on X Factor and is a great singer/songwriter. He happens to be the son of another one of my friends who is a Member of The Magic Circle.

It was great show,but its just a real shame that there was no magic or magicians on the bill……Just a short clip of Tommy Cooper and Las vegas magician Lance Burton.

It was a great show with huge names like Rod Stewart, Robbie Williams, Kylie and Neil Diamond, but for me it was little old Bill Bailey who stole the crown as far as entertainment!

Bring back Magicians please, failing that you could book a live magician yourself like me! click HERE